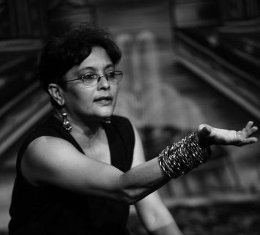 As a Kannada poet and playwright, Mamta Sagar has three collections of poems, four plays, an anthology of column writing, a collection of essays and a book on Slovenian-Kannada Literature Interactions to her credit. At the soon-to-come publishing conference Publishing Next ’13, scheduled for the 20th and 21st of September this year, Mamta will be a speaker. Before the conference, however, we (PN) got Mamta (MS) to share her thoughts:

PN: Some of your works are about the atrocities and problems that women face in India like the collection of Essays in Kannada and English on Gender, Language, Literature and Culture- “MahiLa Vishaya”. What inspired you to write about the women in India?

MS: While writing, each one of us needs to be sensitive to issues associated to women like the way we would be sensitive towards various marginalized groups and communities. It doesn’t matter whether you are a male or a female writer. Because, writing about women, is also a critique of the male world loaded with class, caste and gendered hierarchies in the society around us. Women issues are always understood as something to be dealt by women, for women. As writers, while women write about this, all other things addressed by them remain unseen and there is a tendency to look at and categorize their writings as ‘women writing’ that remains away from the main stream. Well, after all this, I am a woman and how can I not write about issues related to women in the social spaces I live in? I think all these answer the second question asked to me about what inspired me to write about women in India. ‘MahiLa Vishaya’ is a compilation of selected articles I wrote on many things around gender, language, literature and culture, as all these are interwoven and cannot be addressed in isolation.

PN: You conducted poetry workshops for two schools in Durban and a theatre workshop for young girls from the economically backward communities in Hyderabad, was it easy to get the required crowd, especially the girls in Hyderabad? Could you share with us these experiences?

MS: The workshops for schools in Durban was during my participation in ‘Poetry Africa 2005’, International Poetry Fest. Both workshops were organized by the festival organizers. These were for the young adults, high schools students from the 10th, 11th and 12th grades. The workshop had group activities, singing, reciting and performance. The participants composed poems in the workshop. They came out with collaborative poems written in a group, poems written individually and some recited the poems they had written sometime ago. It was fun. there were many love poems, poems focusing on social issues, some very personal and thus they touched upon various aspects of life. The whole workshop is filmed by Poetry Africa. Zulu and Khosa languages were given more importance and the participants enjoyed speaking and composing in these languages and mixing them with English during the workshop. It was fun and I thoroughly enjoyed it along with the participants.

The theatre workshop with the girls in Hyderabad was different. This was for an NGO that is engaged with issues of women and girls in the Old City (the Charminar area). The NGO had organized the group. Participants were girls between 15-25 age group and were from socio-economically backward groups. Most of them were children of domestic maids, zardozi workers or those who had petty business in the old city. They would come to this NGO for learning tailoring and other skills. The workshop came up with “Purdah”, a play script in Urdu/Daccani derived from the personal stories and anecdotes collected from the participants. It was not easy to put things together. This play was staged at ‘AKKA’ National Theatre Festival for Women, Rangayana, Mysore, 2001.

PN: At the Fifth Anniversary of the World Poetry Gala Celebrations (February 2006), your poems in Kannada original along with their translations in English were displayed at the Vancouver Public Library and then at The Africa World Press at the World Social Forum, Nairobi, Kenya 20-25, Jan 2007. How did it feel to have your poems displayed at such major events and what do you think it means for Kannada (or Indian) literature?

MS: It is a great feeling when my poems are showcased and I am invited for the major events of international importance. The events like these and the International poetry festivals give a greater exposure to other worlds of poetry hidden and unknown. Poetry is a genre that leaps beyond the literary confinements. Poetry happens for many reasons and no reason at all. Here ‘no reason’ too is a reason for me to engage with it.

My participation, I am sure is very special for Kannada (or Indian) literature. It means a lot to me when I am invited to represent my country/language. Meeting poets from an unknown language culture is very interesting. It is a special experience reading/performing in Kannada. I sometimes mix my Kannada poem with its translation in Cebuano or Spanish or Vietnamese and perform it with the poet/translator. I enjoy listening to the sounds and musicality of the languages hidden in poetry. Rationale for a poem like love or war, resistance or incorporation, simply the music, rendering by the poets, their body gestures, voice modulations, everything interests me. I am curious to know more. That which happens through a poem on a page is so very different from what it gives through a performance. I want to bring all this into Kannada.

I am curating a poetry event, ‘Kaavya Sanje’ once a month in Bangalore. This, ‘An Evening of Poetry’ is an activity involving mainly students and the general public. Here, participants are invited to read self composed poem and/or poetry by poets from Kannada, other Indian languages and non-Indian languages. It is an attempt to look into the multifacetedness of poetry, link it with young poets and the public and make poetry reachable and more popular.

I have translated many poets from different parts of the world into Kannada and many poems from Kannada into English. My poems are translated into many International languages and some Indian languages. Apart from writing poetry, translating in and out of Kannada is something that I truly enjoy. Poetry for me is an activity to bring people together, understand, interact and share those that remain unsaid between the lines. My participation in the International poetry Fests has brought a few internationally important poets to India. Amadou Lamin Saal from Senegal, Lemn Sissay from Britain, Antoine Cassar from Malta, Brane Mozetic, Susan Tratnik, Andrej Blatanik and Veronika Dintinjana from Slovenia have visited India and read in Bangalore, Hyderabad and other cities with the poets from the local languages.

My writing has been influenced and molded by my responses to the Kannada/Indian socio-cultural and political situations. The women’s movements, literary movements, a huge treasure of the classical literatures available to us in the languages and in translations have all shaped my writings. Many private and the state owned literary institutions and organisations that promote and publish poetry have recognised my writings by including them in the anthologies, magazines and the poet’s meets organised by them. My activities around poetry is so minimal compared to what I gain through my engagement with it. A collection of my selected poems ‘HIDE and SEEK’ will be published shortly. This set of poems in English translation will have the Kannada source text along side. I am eagerly waiting for this book to come out.

PN: Could you tell us about your thesis “Gender, Patriarchy and Resistance: Contemporary Women’s Poetry in Kannada and Hindi (1980-2000)”. Why did you chose to work on this paper?

MS: 1980’s to 2000 is a crucial juncture in the Indian socio-cultural context. Women’s movements, the Dalit movement, movements of the marginalised, the identity politics, the post colonial positions, all these were bringing drastic change in the expression, perception and analyses of the literature we come across. Each category was forced to address questions around gender and resisting patriarchy because not answering the gender questions would leave the issues pertaining to class or caste incomplete. Women’s poetry is an area that opens up debates related to literature and women’s point of view in a patriarchal society. Therefore women’s writing is not only a part of literature but also an area that discloses nuances of the experience of specific community in a given society. This community which is always misunderstood as monolithic, showed up its multidimensional phase during this period. The documentation of personal experiences in women’s poetry extends to the public spheres and address issues in general and those related to women in particular. Activism on the other hand contributed to the strengthening of women’s poetry. Literary and social censorships were taking place due to religious, regional and linguistic fundamentalisms. The Indian politics experienced ideologies and political stances that were less liberal and non-democratic. Women poets responded to all these. They never restricted themselves to women’s causes alone, proving that women do not have a special ‘women’s sensibility’, restricted to domesticity and sexuality alone. Instead, women’s sensibilities are not very different from that of men’s. This period opened gates to the new themes in literature and allowed the visibility of ‘the regional’ on the International canvas. More than anything, I choose to work on this because it allowed me to engage with the gender questions which I consider as something very important and then poetry which I am passionate about.