A Roald Dahl book inspired, read aloud session was held on the 27th of May, 2016, at The Dogears Bookshop, Margao. It was conducted by Jugneeta Sudan, academician and freelance writer, for a group of seven children, and four parents who were also present. The read aloud session started off with the distribution of Roald Dahl books among the children, familiarizing them with the way his books are written. It was then followed by a presentation introducing Roald Dahl to the children, his previous occupations, childhood hardships, etc. Short videos on his books that were made movies were also shown to children.

The read-aloud commenced with Roald Dahl’s The Magic Finger and Matilda. Various words and their synonyms were also i 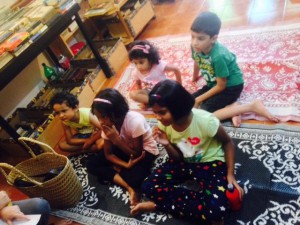 ntroduced to the children. Activities on the same were also held to drive home their meaning. for the older children while the younger children were kept busy by being asked to colour to their heart’s content.

At the end of the session, the children were seen to have been mesmerized by the stories read out to them and were eager to buy the books they heard about, along with the other books written by Roald Dahl. The smiles of the little children were rewarding and the session concluded on a happy note.