While attending the Goa Art and Literature Festival, I found myself, quite unexpectedly, invited to a panel discussion on the future of publishing. The panel’s brief was to examine if the publishing boom, that is currently being experienced, can be sustained. Others on the panel included Chiki Sarkar, publisher of Penguin Books India, Nirmal Kanti Banerjee, Director of K K Birla Foundation, New Delhi, Frederick Noronha, publisher of Goa 1556 and S. Anand, publisher of Navayana. 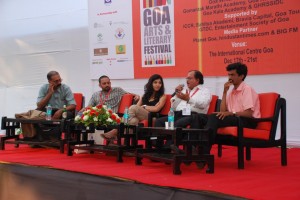 Chiki Sarkar was the moderator and she began by asking whether there was credence to the belief that there is currently a boom in publishing. Most answers to that question were in the affirmative but came with riders, that referred to the abysmal state of distribution as a major factor that dampened growth. So while sales were increasing and there seemed to be a visible increase in the number of people reading, many more readers could be had if there was indeed a well developed distribution system. Frederick, who publishes books that appeal to a relatively small audience, hastened to say that sales were not a benchmark, rather the variety of titles he published. Similarly, Anand and Nirmal pointed that although readers were buying more books, books bought per capita was a low, abysmal, figure of 1 book per person per year and then too this figure was even lower among some languages.

What was most interesting, though, was Chiki Sarkar’s answer to her own question. She said that while books were indeed selling in large numbers, they belonged to a few categories. So the best sellers included diet books, cookery books, books that documented success stories like Rashmi Bansal’s Connect the Dots, self-help books and maybe books that belonged to a few other such categories. Among fiction, the books that have captured the readers’ imagination are books that are not necessarily well written but those that “connect with the reader”, now often collectively called the “Chetan Bhagats”. Suffice to say that the publishing boom did not point to an increase in readership over all kinds of books, or lead to an increase in literary output, but led to mounting sales of just a few kinds of books. These categories are now considered safe bets and publishers bet on them because they seem to reflect contemporary readers’ tastes.

The implications of this fact are many. For one, the sales of such books might lead publishers to concentrate on them alone much to the detriment of other types of books. At best, it might cross-subsidize the publication of these other types but a publisher would have to justify his/her decision to publish such a book. Moreover, the success of these diet and cookery books might lead publishers of books in the languages to mimic their English counterparts and concentrate on such books alone. This could indeed be harmful as these “language publishers” have so far been doing an excellent job giving expression to disparate voices and offering insights into the lives of a large percentage of the population.

Secondly, like Anand pointed out, the huge bookstore chains are concentrating on these “bestsellers”. Under pressure to improve their margins and increase returns on large real-estate investments, many of these stores have begun reducing the inventory they hold. More often than not, this reduction manifests itself as fewer titles being stocked. This while large numbers of the bestselling titles are kept in inventory for fear of stocking out in the face of large demand. On this blog we have often argued that the fact that online book stores have unlimited inventories mean little to publishers in terms of revenues since in most cases books are used as loss leaders.

The third implication leads directly to the surge we have seen in recent days, of authors increasingly interested in self-publishing. The ease that technology provides to allow easy self-publishing notwithstanding, we at CinnamonTeal have ourselves witnessed an increase in the numbers who have come to us with a wish to self-publish. While some may argue that these are not books that would have been taken seriously by publishers anyway, we have seen trends that show otherwise. Among our books, we have had a lot of poetry, sci-fi, paranormal thrillers and studies of mythology and oral traditions. Perhaps, this surge in self-publishing, and in subjects as varied as these, is because mainstream publishers just aren’t interested in some kinds of books anymore. Self-publishing aside, the increase in the number of independent publishers and a glance at their lists paints a different picture, of the need for platforms that will allow different voices to express themselves.

Before we celebrated the boom in publishing, therefore, there certainly seems to be a need to introspect on the quality of our literary output and the means available to us to improve it.

Update: In related posts, Shobit Arya, founder and publisher of Wisdom Tree, argues for a balanced and nuanced approach to bookselling while predicting an increase in what he calls “paisa-wasool” (money’s worth) literature. David Davidar, founder of Aleph Book Company, sounds very optimistic when he states that Indian writers are charting their own course and are spoilt for choice with many genres yet to be fully exploited.