Thomas Stephens, arguably one of the first Englishmen to come to India, ultimately spent 40 years of his life here, most of them in Goa. Born at Clyffe Pipard, Bushton, Wiltshire, England in 1549, he fled to Lisbon to escape religious persecution wrought by Henry VIII against the Catholics. In 1575, he joined the Society of Jesus and opted for the Indian mission, arriving in Goa in October 1579. 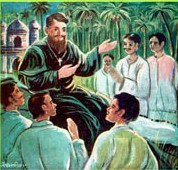 He seems to have fallen in love with the land of Goa, writing extensively about the land and life here. In one letter to his father, he wrote that “the tall coconut trees in Goa were completely different from anything he had seen before”. Even more than the land, its languages seems to have captivated the imagination of this young priest. There is a record of a letter he wrote in 1583, in which he has praised the local languages for the beauty of their linguistic structure, which to his ear was “allied to that of Greek and Latin”. 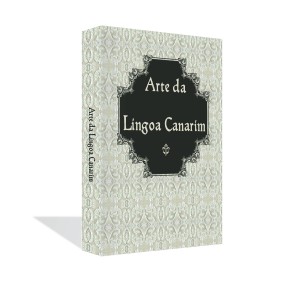 Thomas Stephens is primarily known for three works of literature: The Krista Purana, a re-telling of the Bible in Puranic form, which today is still considered one of the finest specimens of Marathi penmanship, Doutrina Christam em Lingoa Bramana Canarim and The Arte de Lingoa Canarim, considered the first written grammar of Konkani or any modern Indian language.

The Arte do Lingoa Canarim was perhaps based on an earlier work already being undertaken at Rachol and documented as having been in use at the College of St. Paul, Old Goa. His manuscript of the Arte remained unpublished and is believed to be in the possession of the School of Oriental and African Studies, SOAS, London. It was enlarged by Fr. Diogo Ribeiro who, according to Manoharrai Sardessai in his book “A History of Konkani Literature: From 1500 to 1992”, is said to have added to it “the fruits of his fifty years’ study of Indian languages”. But neither Fr. Stephens nor Fr. Ribeiro lived to see it in print, for it was only in 1640 that it was issued from the Press of what was then called the St. Ignatius College of Rachol.

Upto now, this edition was not available in Goa, or even in India. A later edition, by J. H. da Cunha Rivara, a great advocate of the Konkani language although Portuguese by nationality, was published in 1857 and is relatively easier to access.

I do not remember when it was that we were first introduced to the Arte. But I do remember that once we were introduced, we were consumed by a passion to ensure that it was again available in print here in Goa. Perhaps it was because it didn’t seem fair that a book like that, considered the first written grammar of any Indian language, and one written for a language we consider so beloved and sacred, should not be available in Goa itself, or even in India. Or perhaps it was so because curiosity got the better of us – to know what the book, printed less than a 100 years after the advent of the printing press, looked like and to know how the language which we studied in school had evolved from the one in that book. Many have asked us why we published this reprint. It is because we think it is an important document of the history of our language as also of its fortitude in an ever-changing world. That a language whose usage was effectively banned by the rulers of the time survived that onslaught and became a mai bhas (mother tongue) to people of an entire region must be a strong one that allows expression in ways that only it can. 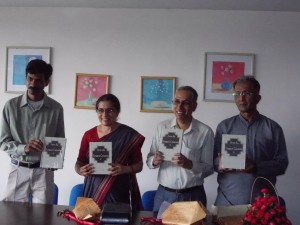 During a trip to London last April, we had an opportunity to visit SOAS and access their Konkani catalogue there. Imagine our joy when we discovered the 1640 edition listed there. One thing led to another and we launched the third (facsimile) edition of the Arte on the 19th of May 2012. This, third, edition is accompanied by an introduction by Fr. Ivo Coelho s.d.b.

The launch itself was a lesson in the evolution of the Konkani language. Dr. Madhavi Sardessai, Reader and Associate Professor in the Department of Konkani, Goa University, explained how the work of Thomas Stephens has extreme significance both a document of the time and as evidence of how the Konkani language had evolved. Fr. Pratap Naik s.j., previously Director of the Thomas Stephens Konkani Kendr (Centre) and Fr. Mousinho Athaide, Professor of Canon Law at the Rachol Seminary also spoke, on the need to keep this rich language alive irrespective of the script it was written in.

At CinnamonTeal, we are proud to be a part of what we truly consider a historic moment. We feel that the Arte gives the Konkani language a sense of time and a place in history. It will definitely help researchers and scholars of linguistics and we are happy we had a part to play.

The book is available for sale here: http://www.dogearsetc.com/books/arte-da-lingoa-canarim/35579

The end of the book as we know it?