An unscheduled but much welcomed session by Anish Trivedi concluded proceedings on the first day of Publishing Next. This veteran of the music industry shared his experiences with the evolving music industry scenario over the last fifteen years. 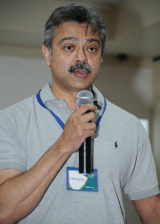 Anish shared his opinion that within the music industry, it is not the music label, or the listener but a group of companies that own every radio station over the world who decide what is heard. “There are musicians who will never be heard because some software decides what’s to be heard on the radio.” he said. He put forth an interesting fact, “If there are 50 manuscripts that get trashed at a publishing house every week at one publishing house, there are probably 5000 tracks that get trashed everyday in the music industry,”  thus drawing parallels with the publishing industry.

The music industry had spent a lot of time plotting how they could be protected from the internet, stop piracy and eliminate peer-to-peer sharing. Ten years were spent trying to combat these “ills” (quotes ours) and all they realized was that it cannot be stopped. The consumer refuses processes that make it difficult for them to listen to music. Meanwhile, sites like emusic suggested that musicians put their tracks up for free. The way out was to collaborate with online mediums to make it easier and more convenient for music to reach the people.

Since there is no data available on sites, how do you find a track? In the Indian music industry, nobody knew the name of the song or singer; they knew the actor in the song. That made it easy for them to find music on certain criteria, by putting data together. Anish exhorted the audience to action saying, “It took us a long time to realize that things have changed. Don’t make the same mistake, because whether it is the ipad or iphone, the convenience of it will draw people to it.” His advice was to use technology to reach the audience, not to protect content against who might be genuine customers.

“The paradigm has changed”, he concluded.

The parallels are too obvious to ignore. The traditonal gatekeeper role that publishers have played, and sometimes importantly so, is being challenged by various options that make it easy for authors to self-publish. That said, it is sometimes difficult to believe that a few editors can decide, and will do so correctly, what millions will read. The need therefore is for independent publishing houses that will support alternate voices and opinions and independent bookstores that will pay lesser attention to margins, concentrating instead on providing visibility to lesser known titles.

Similarly, the desire to control usage of digital content is too attractive for some publishers. At CinnamonTeal Publishing, we believe in the author’s right to choose on which platform books can be read. We would rather appeal to the reader’s sense of ethics and discourage piracy. That may or may not work and less subtle forms of discouraging piracy (like social DRM) are now available and could be employed. However, to totally restrict usage to publisher-mandated platforms may be counter-productive.

This report was presented by Lianne Caldeira and Malaika Fernandes at Publishing Next, 2011.