An oxymoron is a rhetorical figure of speech in which seemingly contradictory terms appear side by side. Writers often use oxymorons for a dramatic effect or to call attention to an apparent contradiction in the narration. They may also be used to add flavor to one’s speech or in an attempt to be cynical. On occasion. they also serve to make one stop and ponder.

Interestingly, the word oxymoron itself is derived from two Ancient Greek words oxus meaning ‘sharp’ and mōros meaning ‘foolish’, thus making the word itself an oxymoron. English oxymorons are rather humorous at times, given the absurdity of the pairings. Here are a few that caught our attention. 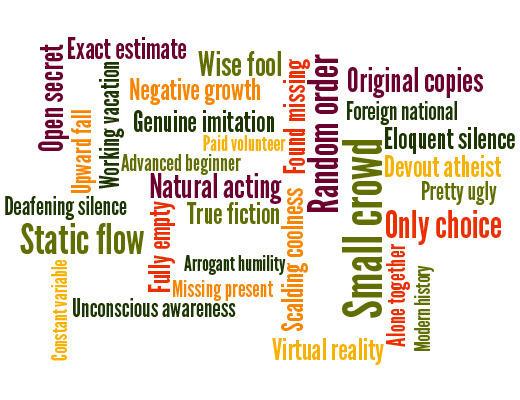 Sentence Examples with Oxymorons
Seeing oxymorons used in context often helps to provide a better idea of how and why they are used. Here are a few well-known sentences and quotations that make use of oxymorons.
1. “Destroy the old files, but make copies first.” – Samuel Goldwyn
2. “We had an unlimited budget and we have exceeded it.” – Anonymous
3. “Anyone who isn’t confused here doesn’t really know what’s going on.” – Anonymous
4. “Tell them to stand closer apart.” – Samuel Goldwyn
5. “I might be a superficial person, but that’s just on the surface.” – Andy Warhol
6. “We are not anticipating any emergencies.” – Anonymous
7. “I like humanity, but I loathe persons.” – Edna St. Vincent Millay
8. “Always be sincere, even though you do not necessarily mean it.” – Irene Peter
9. “I’d give my right arm to be ambidextrous!” – Anonymous
10. “Always remember you’re unique…just like everyone else!” – Anonymous

We are also looking for guest bloggers who will share their thoughts with us, so if you are interested, please drop us a line at [email protected]eal.in.