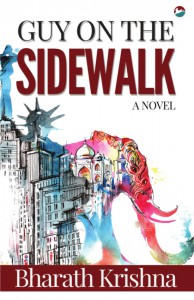 CinnamonTeal caught up with Bharath Krishna, author of “Guy on The Sidewalk’.’, to discuss the motivation behind his book, his choice of characters, and his plans for the future.

CinnamonTeal (CT): Why did you choose this title for your book?
Bharath Krishna (BK): ‘Guy on the Sidewalk’ is the story of a young man who is constantly pulled back by some unknown force from doing what he really wants to do in life. Finally, he breaks out of both, his real and imaginary constraints, and chooses to listen to his heart. This, in turn. impact both his professional and personal choices. ‘Sidewalk’ is a metaphor I use to mean something that’s not main street or real world, from which this guy tends to keeps a safe distance without facing head on, until he does one day.

CT: What makes ‘Guy on the Sidewalk’ stand out in the crowd?

(BK): The novel deals with the intricate and conflicting human emotions that are woven within an engaging story. The main theme is told in a very subtle manner, with wit and sarcasm peppered throughout. In all, there is something in the novel for everyone to relate to.

CT: Why spend time in your life writing a book like this?

(BK): Even before I became a novelist I wrote on and off in blogs, social media and sometimes just for myself. Looking back I could see that unknowingly I wrote only when there was some social or political phenomenon that prompted me to write. The same is the case with my debut novel too. This is a story I felt should be told to the Indian youth. From the perspective of a young man I tried to incorporate contemporary elements – like the life of NRIs, return to India, the changing pattern of relationships, and one’s responsibility towards parents and the country.

CT: Is there any truth into the characters of your book? Are there any real life inspirations?

(BK): A writer cannot completely ignore his impressions. To some extent I might have been inspired by the people I had seen or heard about or read in the media but I tried my best not to create characters in the novel that corresponded with real people. I have intentionally taken the time period I stayed in the US as the time period of the story so that I could relate the external environment better.

CT: What do you think makes a good story?

(BK): I have a simple definition for a good story – the one that strikes a chord with the audience. I guess that’s true for any piece of creative work.

CT: Do you have any particular favorite character in the book?

(BK): Besides the main character, Jay, I would say, Jhansi.

CT: Where were you when the idea for this book came to you?

(BK): I was in the US, and I was planning to come back to India for good.

CT: What do your plans for future projects include?

(BK): Writing for sure is going to be part of my life in the future. In fact I am already working on my second novel. I also have a couple of ideas, thought at a very nascent stage. As I said before I would prefer to write on themes the readers could relate to the world around them.