How much have you shifted online? Do you pay your bills online? Has it got to do anything with eBooks? Probably yes and probably no.

In 2001, Marc Prensky proposed the terms “digital natives” and “digital immigrants.” Those born after the introduction of digital technology are digital natives and those born before, digital immigrants. Digital natives are likely to embrace digital technology as if it’s their second nature, whereas digital immigrants need an effort to do that. But to what extent you are digitalized depends on your work. If your work requires the use of digital technology (as simple as a Word document as opposed to a printed paper document), you tend to move to digital, not out of choice but out of compulsion. Only those who have got off their active work are not affected by this digital shift. Sheer convenience drives the change sometimes. It is far easier to pay a bill online, say even at midnight, than to queue up for hours. But the paper as a source of records is on the wane, quite irreversibly. The “Search” function’s incredible convenience of locating data accurately and quickly definitely shifts the fence-sitter towards digital.

At the Hay Festival at Cartagena, Jonathan Franzen, author of Freedom (which President Obama requested an advance copy before publication), warned of impermanence in eBooks. The Guardian quotes Franzen as saying “maybe nobody will care about printed books 50 years from now, but I do. When I read a book, I’m handling a specific object in a specific time and place. The fact that when I take the book off the shelf it still says the same thing – that’s reassuring,’ said Franzen, according to the Telegraph,” adding, “Someone worked really hard to make the language just right, just the way they wanted it. They were so sure of it that they printed it in ink, on paper. A screen always feels like we could delete that, change that, move it around. So for a literature-crazed person like me, it’s just not permanent enough.” 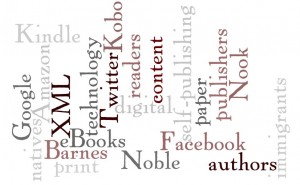 Henry Potter recorded his argument that digital is making us smarter. He questions, “If the printed word were the guardian of all democratic values, how is it that the country where, in 1439, a goldsmith named Johannes Gutenberg invented the movable type printing press succumbed almost 500 years later to a totalitarian hell, in which books, and the knowledge in them, were suppressed with a relatively small number of bonfires? Ink on paper is no more a guarantor of good government than oil paint on canvas.” Arguing that oil paint on canvas has survived, he points out: “The point is that humanity goes on adding to the available means of self-expression and communication, and very few forms or techniques are eliminated in the process, which is one reason to celebrate the possibilities of this extraordinary moment in history.” Taking Potter’s argument further, our temples (churches or mosques) have survived centuries of change and no one razed a them to build a hypercity. Traditional forms of music and dance are still in practice and its later adaptations have not been able to wipe the older form altogether. The reason for their stickiness is “faith” and a puritan mindset. Often, it is argued that changing forms will not have the desired effect and so traditional music has undergone only mild innovations in form while the original is preserved to the maximum. Technology simplifies our mechanical effort and naturally we have found it helping us. It’s more of a fixed mindset rather than pros-and-cons thinking.

Will eBook take over print completely? There is no scarcity of debate on this issue. Those in favour of print talk about aesthetics of typefaces smell of paper, bedtime reading, and all that gives them a sense of enjoyment. Publisher income is still dominated by print. Those inclined towards eBooks point out the convenience of carrying hundreds of books on a single device, searchability, and bookmarking as benefits. Are these people digital natives and someone who stand contrary to Franzen and support Porter? Are print lovers digital immigrants and echo with Franzen’s point of view? May be and may be not.

Digital technology is shaking the very foundations of business models on which publishing has survived for centuries. The authenticate (editorial), publish (publisher) and distribute (bookstores) form of publishing is challenged by self-publishing and online bookstores. You don’t need all that you needed before to reach the reader. Interestingly, André Schiffrin (Business of Words, Navayana, 2011) does not discuss self-publishing, perhaps because self-publishing was not considered significant when he wrote Words & Money. Alan Rusbridger, in a lecture a couple of years ago, spoke of the breaking down of walls and the dilution of high position held by journalists in deciding what to say, thus challenging the monopolistic structure that has been in practice for decades, if not centuries. Social networks such as Twitter provide voice to the reader who was not heard before. Citizen journalism is a reality and all this is because of digital technologies. The growth of self-publishing could be attributed to authors eager to find their voice and name in a publication, going beyond the publisher and leveraging technology.

Publishers are in a momentous shift, and are increasingly finding ways to maximize profits. So Penguin USA has launched Book Country, a self-publishing imprint for new authors to publish without editorial intervention. It has gone ahead to acquire two titles from Book Country for its regular imprint. It is clear that publishers chase only profitable acquisitions and self-publishing was never on their radar till recently. But the success of Amanda Hocking has turned their attention to self-publishing as a viable source of their most important criterion – income on balance sheets.

Amidst reports of robust eBook sales quarter after quarter and the monopolistic attitudes of Amazon and Google in dictating market forces, the reader is caught in a time warp. A sensible reader always weighs the costs against the pleasure of reading. If the digital form will provide more pleasure at low cost, in their opinion, the readers will embrace it willingly. Certain mindsets that favour only print as authentic, like Franzen’s, and their bias towards the smell of print will make them take to print. Reader habits will be increasingly defined not by reader tastes but how disruptive technologies like Amazon’s self-publishing take prominence. Economics is important in this globalized world and anyone in publishing will pursue only those endeavours that give them maximum returns, with total disregard for reader preference and the reader will be forced to consume what is on offer. The publishers will try to influence the readers’ minds in favour of technologies that are cost-effective for them. Seeing that the reader has not outright rejected the digital forms, the publisher will push them more.

But all those apart, you will read either printed book or on an e-reader depending upon what you like and what is convenient to you. Jonathan Franzen’s concerns will be countered and forgotten, and digital natives will place the argument in their favour. As long as you read, why bother about these debates? Any way you, the reader, can hardly influence it, whether you are a digital native or a digital immigrant, agree with Franzen or disagree with him.

K. Venkatesh is founder of VirtualPaper, a freelance copyediting firm and writes on entrepreneurship and publishing.