As we continue to make books on Goa available online, here are a few for history buffs. 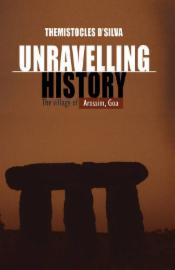 Unravelling History: The Village of Arossim, Goa
by Themistocles D’Silva
ISBN: 9789380739915
Format: Paperback
Year of Publication: 2015
Publisher: Goa 1556
Pages: 220
Known to the outside world for its scenic beach, the rural South Goan village of Arossim has a long and complex history. Situated between the Arabian Sea and tributaries of the River Sal, this agricultural land has sustained inhabitants since Neolithic times. Early tribal rituals, Hindu traditions, and Christian practices have each contributed through the centuries to the unique character and customs of the people.

Themistocles (Themis) D’Silva, in this revision of his 2011 book, explores the forgotten and concealed history of his ancestral village. He extends the history of the region to the Megalithic Period, after recognizing that stone clusters nearly hidden in the rice fields are in fact monuments of an ancient settlements. These megaliths were erected perhaps 3000 years ago and still stand tall, although their significance has been forgotten.

D’Silva also takes us to the land, its people, shrines, festivals and feasts,temples, notable facts and events, priests and nuns, personalities from the past, slavery in colonial Goa, and more.

The author, who grew up in Arossim, potrays many aspects of the village, including the ancient system of self-government and the profound effects of Portuguese colonialism. He unravels the origins of many earlier and present-day local customs, some of which are fading as Arossim modernizes and changes.

Bomoicar: Stories of Bombay Goans, 1920-1980
by Reena Martins
ISBN: 9789380739427
Format: Paperback
Year of Publication: 2014
Publisher: Goa 1556
Pages: 154
Bomoicar takes you on a round trip of twentieth century Bombay. Stop for a bite of baangda-curry-rice and tongue roast at joints in Dhobitalao, originally a washerman’s lake. Lake in the evening, down a glass of the Goan Aunty hooch with roasted gram or fried Bombay duck. And as Cotton Mary serenades you from quadrangles in Byculla, Mazagon, Grant Road or Colaba, inhale the aroma of cutlets and potato chops wafting from tiny Goan Kitchens.

The author, Reena Martins is the quintessential Bomoicar, as she calls herself in Konkani. A Journalist by profession, she has been writing for the country’s leading newspapers for almost two decades now. This time around, she serves delicious slices of Goan life that once thrived in the bylanes of Bombay. 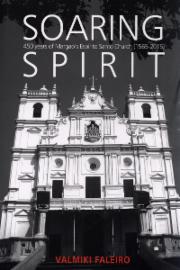 Soaring Spirit: 450 Years of Margao’s Espírito Santo Church
by Valmiki Faleiro
ISBN: 9789380739908
Format: Paperback
Year of Publication: 2015
Publisher: Goa 1556
Pages: 299
This book offers facts, solves puzzles and throws up colourful details of an institution that shaped Margao’s life for centuries. It walks us through the times of our ancestors, many generations removed.

But while zooming into details, Faleiro does not miss the big picture. Quoting historians and scholars, challenging legend and assumption, he pesents a world of facts. A list of Margao’s priests, and an insightful introduction to the Largo da Igreja, the church square, and its people, are what lend further charm to this book.

A journalist by profession, Valmiki Faleiro has been published in mastheads across the country, built a reputation in the West Coast Times, and inspired a generation of younger mediapersons with his eye for detail and determination to get out the story. His earlier work is Patriotism in Action, a painstaking listing of Goan officers in the Indian armed forces. Faleiro has written a closely watched column that ran for almost half-a-decade in the local media and on Goanet in cyberspace.

All books are available on dogearsetc.com